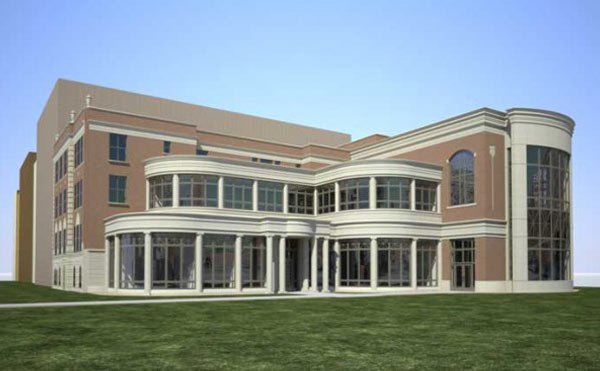 The HBM scope of services for this project included design of all structural elements, production of structural drawings and specifications, review of shop drawings, coordination and field visits during the construction process.  In addition, foundation underpinning calculations, design plans and specifications for an existing, adjacent six-story brick building impacted by the new foundations were included in the scope of work.  A field inspection and investigation was performed on the existing building to assess the structural supporting floors, beams, columns and bearing walls.  This data was utilized in the renovation and remodeling design plans of the existing portion of the building.

A Finite Element Model of the structure was developed by using SAP 2000 to reflect the true geometry of structure. Beams and columns were modeled by line elements and beam ends were released to simulate shear connections wherever needed. All foundations were assumed to be pinned in the mathematical model. Few frames in all directions were modeled with moment connection members to resist forces resulting from the design load combinations.  The concrete floor slab was modeled by rigid floor diaphragm at every floor level to distribute lateral wind forces homogenously among all members.  Dead, live and wind load patterns were calculated and applied to model for all applicable load cases.

The foundation was designed to support the service loads of the structure and a Finite Element Model (FEM) was created for the mat foundation using soil springs and plate elements.

Additionally, a construction stage frame was modeled to reflect the stability condition of the structure during the construction stage. SAP 2000 feature of steel design was used to design steel members as per AISC Steel Design Code. Beams and columns are checked for all possible combination of shear flexure and minor direction bending moments at six different stations. The P-M interaction values were displayed in design charts.